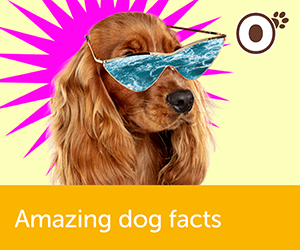 Some Amazing Facts on Dogs

Bet you didn't know this!

So, you think you know everything there is to know about dogs.  See below some amazing and unusual facts about dogs you may not have heard about before.

A greyhound can run up to a speed of 35 miles per hour.  Indeed they are known to be able to keep this speed up for 7 miles WOW.  This means that they could outrun a cheetah in a long-distance race.  A cheetah can only keep it speeds up for 183 – 275 metres.

Newfoundland dogs would make a brilliant lifeguard. They have waterproof coats and webbed feet. They were originally bred to help Fishermen save people from drowning. Some owners have even reported that their Newfoundland tries to “rescue” them when they’re swimming!

For music fans out there, in 2013 Paul McCartney revealed that the Beatles song “A Day in the Life” has a frequency only dogs can hear.  Play the song and watch your dogs’ reaction.  Now that is an amazing fact.

Chow Chow and Shar-Pei breeds are the only two breeds of dog that have a black tongue.  The cause or the reason for this is not known.

Wet Noses - Dogs noses are wet to help absorb scent.  Their noses produce mucus to help them absorb smells.  They lick their noses to help them identify what the smell is.

Tallest Dog - A Great Dane called Zeus holds the Guinness Book of Records as being the tallest dog in the World.  He was a magnificent 44 inches tall.

Titanic It is believed that three dogs survived the sinking of the Titanic.  One of them, a Pomeranian, was rescued by wrapping the dog in a blanket and carried like a baby.

Puppies, when born are blind, deaf and have no teeth.  Dogs are direct descendants of wolves. They will curl up to keep themselves warm and protect vital organs. A dog's sense of smell is 10,000 times stronger than a human's.